Seaside, Ore. – Sept. 30, 2014 – The Seaside City Council moved one step closer towards completion of the yearlong visioning project, Seaside 2034, after a three-hour work session on Sept. 29 at Seaside City Hall.

Facilitated by Coraggio Group, a Portland-based strategic planning and consulting firm that has vast experience in the government sector, the five council members and Mayor Don Larson went through a series of exercises that analyzed and reviewed information taken from August’s Town Hall. The council also reflected back on surveys, a youth summit and community workshops that were held during the previous year to craft its final vision statement. 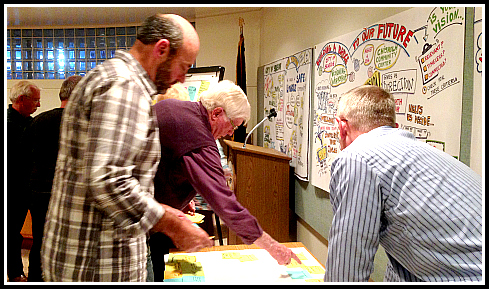 “The workshop was a culmination of a very thorough and involved process,” stated Jon Rahl, assistant general manager for the Seaside Visitors Bureau and Seaside Convention Center and one of the project’s team leaders. “The project team and council members want to thank the community for their input and participation throughout the project.”

Seaside’s City Council is expected to address the vision statement at its Oct. 13 council meeting, which will likely include a wrap-up report by Rahl, Esther Moberg (Seaside’s library director) and Jeremy Goldsmith(Seaside’s Americorps volunteer).

Citizens can also expect to receive a small mailer in mid-October that announces the statement and gives a quick overview of the project. A graphic overview of the Town Hall Workshop is now on display at City Hall and can be viewed during regular business hours. Additional information can be found at cityofseaside.us/2034-visioning.

To view a recap report of the work that the City Council completed on September 29, please click here.